Delirium of the Liberator 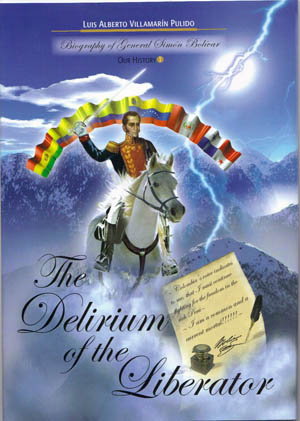 General Simón Bolívar´s Biography timely and illustrated. Product of rigorous and detailed research, The Delirium of the Liberator describes the experiences of the Venezuelan warrior-statesman.

As an outstanding hero in world history, Bolívar built networks of democracy and independence in six republics, commanded in the field of battle more than a million soldiers of different nationalities, participated in 14 military campaigns, wrote several constitutions and fought in more than 400 battles against the powerful Spanish empire in Latin America settled until the early nineteenth century.

The historical review of the Liberator Simón Bolívar, described in this work, covering his traumatic childhood, academic difficulties, youthful irreverence, his military background, his tragic marriage and the myriad difficulties he faced to lead the war of independence against Spain, despite to misunderstandings, betrayals, the disloyalties and conspiracies hatched the Santanderistas and the same benefit from its magnificent work.

Bolivar came to the tomb in a strange house and borrowed shirt, despite being born amidst richness and all the facilities of the time.

In The Delirium of the Liberator, the reader can see the evidence of the spiritual greatness that forged the hero, the indomitable courage of the warrior, the geopolitical vision of the statesman without equal, and the genius of the Great Liberator, despite the weaknesses inherent in any human being.

In September 2006, Verdadero Orgullo Hispano Organization based in Elizabeth, New Jersey, honored the work The Delirium of the Liberator, with the prize of the same name in recognition of the historic value and research effort to reconstruct the biography of Simon Bolivar which approximate to reality.

The theme of the book reaches the same conclusion regarding the Inca Choquehuanca also called Genius of America: His name, his glory and his work will grow the shadows grow when the sun sets.